A book titled Secret SAS Missions in Africa unintentionally reveals how the UK fomented civil wars in Africa to prevent black power, killing millions with covert white militias during the de-colonization period. Readers of this book looking for military insights, beware its skewed political perspective of soldiers terrorizing civilians to perpetuate white supremacist doctrine while calling themselves the good guys.

The book was published by Michael Graham, and the NZ press has offered us some brief glimpses into 1970s-era perspectives of the British military:

There were shouts on the hill slope below us. Shots came our way. With the advantage of the high ground, we lobbed fragmentation grenades down on top of them, followed by a couple of white phosphorous canisters.

We heard screams as the chemical burned into flesh. Dry grass caught fire. We fired mercilessly at the sounds and movement below.

From the civilian camp we could hear shouts of confusion and terror. I felt for those poor people. We would do them no harm that night. If we did succeed in driving away the terrorists, they would get back their freedom. They wouldn’t know it, but we were their best option.

Graham repeatedly refers to his targets as terrorists, and the subtitle of his book is even “C Squadron’s Counter-Terrorist Operations 1968-1980”.

That’s very misleading of him, particularly given he throws out analysis like “we were their best option” for civilians while also he admits “from the civilian camp we could hear shouts of confusion and terror”. The terrorists that Graham refers to in his writing seem in fact to be the opposite, black Africans who overtly were attempting to establish self-rule that would end the tyranny of colonial white police states.

Of course any historian of the Cold War should be able to tell you that this “C Squadron” was meant to serve the aims of white supremacist policy; elite troops sent to aid Rhodesia’s Light Infantry (RLI) to destroy African nationalism as evidenced in studies of special operations in the Rhodesian Bush War.

During the Rhodesian Bush War (1964-1979) the white minority-controlled Rhodesian government carried out a remarkably successful counterinsurgency campaign against insurgent groups representing the disenfranchised black majority by relying heavily on the use of pseudo-operations. Pseudo-operations constitute a set of tactics government-controlled paramilitary units use to infiltrate insurgent-controlled territory and networks by imitating the actions of insurgent groups. Pseudo-units may damage infrastructure, set fire to farmlands, or commit general acts of violence while disguised as insurgents.

“C Squadron” was white-only and sent to preserve white-only rule in colonies by any means necessary (even to this day you won’t see a black person attending a “C Squadron” memorial service unless you count the wait staff). Once colonial rule was lost, their role shifted to discredit and destroy black self-determination to help perpetuate South Africa’s apartheid rule.

Here you can see members of “C Squadron” applying “blackface” in the sort of preparation used for a pseudo-operation to harm civilians and blame it on others: 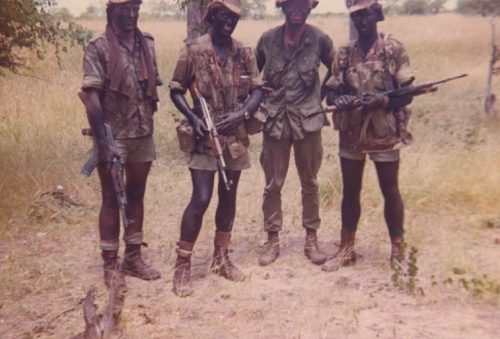 It is highly plausible that Graham’s team of whites was using false flag operations to commit acts of terror and framing them as black government forces, in order to prevent black rule and self-determination.

For some historic perspective, the US Marine Corps in 1919 infamously used “black cork coloring” to infiltrate Haitian rebel (cacos) camps and assassinate their leader Charlemagne Peralte.

Marines produced hundreds of copies of the photo [showing Peralte had been assassinated] and disseminated them by airplane across the countryside, as a warning to the cacos. Instead, the image of Péralte’s body, with its unintended evocation of a crucifixion, became an icon of the resistance.

Let’s look more closely now at the excerpt at the start of this blog to see where the SAS soldiers were being inserted, and what in the news at that time that might have required such white power mercenary services.

Mozambique had been a Portuguese colony until April 1974 when widespread protests in Portugal against colonial wars precipitated a bloodless coup by the Armed Forces Movement. It was a series of military wins by Mozambique’s main anti-colonial force (FRELIMO) that had shaken confidence in Portugal’s military at a time when over 80% of their available forces were committed to three major colonial wars in Africa.

The coup had promises of an abrupt end to Portugal’s colonial rule as the military-led government set about proposing cease-fire terms and granting self-determination to Mozambique. Optimistic theories about a Portuguese-speaking economic union with its former colonies were floated. The nature of these proposals did not sit well with FRELIMO who in their minds had been fighting an independence war of freedom from Portugal, to overthrow the tyranny of colonialism not shift to a free-trade market.

FRELIMO, as their military victory seemed near, countered that any cease-fire come with full authority over Mozambique to establish formal governance. This wasn’t well received by the new government in Portugal for simple historic reasons. FRELIMO had a commanding role in the war yet traditional colonial counter-insurgent/destabilization arguments were that no widespread black representation was acceptable. Other nationalist factions were fomented to dispute FRELIMO in a new government (enhancing and creating fissures and stoking inter-group rivalries was a key tactic of white supremacist regimes aiming to undermine self-determination of large oppressed populations and prevent their union).

These political negotiations didn’t last long as Portugal simply was unable to keep its military from losing all morale, and the 60,000 troops refused to continue despite vastly outnumbering FRELIMO’s 7,000. Thus months after its coup to end colonial wars, Portugal gave up any overt military effort and quickly recognized independence of its colonies.

Thirteen years to the day after FRELIMO was founded, Mozambique became independent, thus marking an official end to its white police state (June 25, 1975). A transitional government was setup with FRELIMO posting six cabinet ministers, and the Portuguese appointing a prime minister and three more cabinet ministers. FRELIMO was given national security responsibilities of the newly independent country.

He boldly tries to spin a narrative that FRELIMO, the officially recognized government of Mozambique tasked with defending itself from foreign adversaries, are terrorists he has been sent to assassinate and otherwise secretly destabilize. What he reveals is Britain was directly involved in white supremacists of southern Africa switching tactics from the failed overt war against FRELIMO to a covert one using terror tactics and pseudo operations. As Graham puts it, just a year after the new government was making a transition from cease-fire to independent rule, he was sent to instill fear to halt political progress by blacks and foment a civil war:

…we were going to kill a few more of them and put the fear of God into the survivors.

They didn’t know who we were, or where we had come from, and we would again show them we could strike anywhere.

This phrasing reminds me of 1969, when a package was sent to FRELIMO headquarters in Dar es Salaam, Tanzania. It held a bomb disguised as a notebook that exploded and killed Eduardo Mondlane, leader of the independence movement, when he opened it. His assassination was never attributed.

Historian pro-tip: I’ve already laid out that Graham was a trained professional killer sent by the British to undermine anti-colonial movements and use terror tactics to slow the inevitable movement towards black self-rule. Now consider that his book cites 1968 as the beginning of his operations and FRELIMO’s leader was assassinated in 1969.

Eduardo began his college education at Witwatersrand University in South Africa, but, after a year, was forced to withdraw by the new apartheid-oriented Nationalist Party government. Protestant missionaries in Mozambique helped arrange a scholarship from the Phelps-Stokes Fund in New York for Eduardo to study in the United States, but Eduardo decided to attend Lisbon University where he could learn first-hand about Portuguese government and policies, and gain a better command of the language. However, after a year of ill-treatment as an African student, he accepted the scholarship and arrived at Oberlin.

His “American decade” began as he earned his Oberlin BA in sociology and anthropology in 1953, followed by an MA at Northwestern University, and a PhD in anthropology at Harvard. He married Janet Rae Johnson, a young white woman from Indiana while he was doing a year of research at Harvard. They had met five years earlier at a Christian summer camp, and had continued to see one another, although her parents were intensely hostile to their friendship.

In a faculty resolution conducted soon after his death, Eduardo Mondlane was remembered as “a strong, intelligent, eloquent, and valiant man–a man of the highest character and ideals. Dedicated to the cause of freedom for his own country, he was in every sense a citizen of the world.”

With the FRELIMO leader profile in mind here is a photo Graham offers us to illustrate his story. It comes from a roll of film in a camera that he grabbed from some of the soldiers his team killed. Note the bottom caption starts with the propagandist phrase “Frelimo terrorists”. 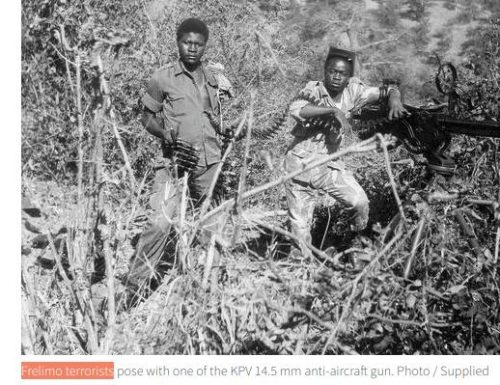 The use of “terrorist” sure seems backwards by Graham, given context of white supremacist covert terror being enacted on the official government soldiers of Mozambique as well as its civilians. Perhaps Foreign Policy does a better job than me in explaining Graham’s role in the elite British-trained killers of Rhodesian “C Squadron” tasked with terrorizing blacks who dared to resist colonial rule:

Mozambique’s civil war was noted for its brutality, meted out in particular by Renamo, a rebel group that was founded, financed, and armed by foreigners bent on destabilizing the country: first by white Rhodesia, then apartheid South Africa.

Just to be clear here, Renamo was known at this time for initiating excessive violence against civilians. This is quite literally who Graham writes about at the start of this blog post, where he tosses grenades and thinks aloud “[civilians] wouldn’t know it, but [Renamo] were their best option”.

It is no coincidence that along with refusing to recognize the legitimacy of black self-rule, Graham proudly displays a photo of himself seated with the notoriously pro-colonialism white-supremacist Rhodesian politician Pieter Kenyon Fleming-Voltelyn van der Byl.

Over the next twelve years, Graham’s role in acting out the genocidal destabilization policies of the Rhodesian white supremacist regime in neighboring Mozambique resulted in shocking crimes against civilians: one million people killed (60% children), 200,000 children orphaned, 250,000 children separated from their families, 1.7 million people (over 10% of total population) fleeing to neighboring countries and 4.3 million people displaced.

Also take note that these devastating numbers on harm to children are symptomatic of the Renamo tactic of kidnapping children, forcing them to murder their own family and then carry out violent raids on civilians to keep their kidnappers well supplied with rations as well as kidnap more children…to continue the violence cycle.

FRELIMO was founded by a man educated in America who held up the principle of bringing education to the entire black population, whereas the SAS-aided white supremacist tactics destroyed 50% of the country’s primary schools, depriving a half million children of education…to continue the violence cycle.

Graham calls his terrorism of blacks the best option?