Humor helps underscore a very real problem with Jaywalking laws, which any historian should be able to tell you:

What sets jaywalking apart is that it never should have been against the law in the first place. City streets were meant for foot traffic and horses from ancient times until the early twentieth century. As a result, early automobiles found themselves alongside all sorts of pedestrians. To make way for cars, literally and figuratively, wealthy drivers and the U.S. auto industry set out to stigmatize lower-class pedestrians who crossed streets at will. Those who wouldn’t step aside for vehicles became known as “jay walkers”…

Or more exactly, clowns were repeatedly rammed by cars in public displays paid for by car manufacturers, to shame anyone walking on the street

Auto campaigners lobbied police to publicly shame transgressors by whistling or shouting at them — and even carrying women back to the sidewalk — instead of quietly reprimanding or fining them. They staged safety campaigns in which actors dressed in 19th-century garb, or as clowns, were hired to cross the street illegally, signifying that the practice was outdated and foolish. In a 1924 New York safety campaign, a clown was marched in front of a slow-moving Model T and rammed repeatedly.

I cover some of this history in my presentations on big data security, such as “Security in a World of Intelligent Machines” 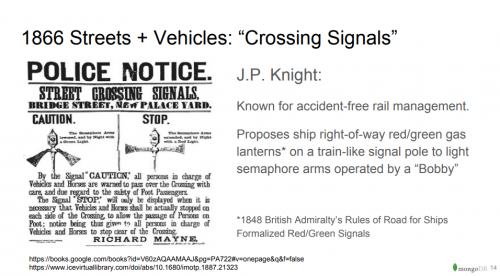 If you look carefully at that police notice from 1866 London it has two modes of operation for the red and green street lights:

American car manufacturers then took that street light concept and flipped it around completely, telling pedestrians to stay off roads, inventing a fantasy crime to shame and physically harm certain races of people for not driving. 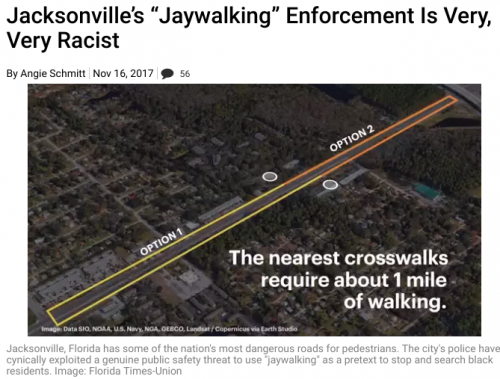 Yes, you read that right. Racism permeates America’s enforcement of this fantasy crime:

In cases like jaywalking, which often hinge on police discretion, blacks accounted for 95 percent of all arrests.

And just to make the point even starker, North Dakota lawmakers in 2017 actively promoted the concept of using vehicles as a weapon to murder pedestrians, awarding zero liability for drivers:

A bill introduced by an oil patch lawmaker would provide an exemption for the driver of a motor vehicle if they unintentionally injured or killed a pedestrian obstructing traffic on a public road or highway.

“It’s shifting the burden of proof from the motor vehicle driver to the pedestrian,” said Rep. Keith Kempenich, R-Bowman

Several months later, Kempenich’s campaign led to a federal civil rights investigation of a white nationalist for murder instead of the zero liability for killing people with cars, which he had promoted to them.

One person was killed and 19 were hurt when a speeding car slammed into a throng of counterprotesters in Charlottesville, where a “Unite the Right” rally of white nationalist and other right-wing groups had been scheduled to take place, the city tweeted on its verified account.

A 32-year-old woman was killed while walking across the street, Charlottesville Police Chief Al Thomas said. Police were still in the process of notifying her family.

Federal authorities said a civil rights investigation into the deadly crash was opened hours after it happened.

In related news, dozens of cities today are restoring pedestrian rights and looking at ways to ban cars from streets:

And while Jaywalking is a fantasy crime that produces little if any positive results, Pontevedra, Spain is being called a paradise after banning cars across most of the city. It is quite clearly the opposite of the city in the Buress comedy routine:

Lores became mayor after 12 years in opposition, and within a month had pedestrianised all 300,000 sq m of the medieval centre, paving the streets with granite flagstones.

“The historical centre was dead,” he says. “There were a lot of drugs, it was full of cars – it was a marginal zone. It was a city in decline, polluted, and there were a lot of traffic accidents. It was stagnant. Most people who had a chance to leave did so. At first we thought of improving traffic conditions but couldn’t come up with a workable plan. Instead we decided to take back the public space for the residents and to do this we decided to get rid of cars.”

The results they have reported are amazing. Can’t wait to hear what Buress has to say about it.

A kind reader sent another comedy video of great relevance:

Think about it, a group of private businessmen coined an offensive slur to promote their product and it worked so well that today it’s a legal term…the streets went from a public place where everyone was welcome to a terrifying off-limits death trap.

Orange County Sheriff’s deputies argued whether or not a Black man had jaywalked and if it was necessary to stop him, then taunted and forcibly detained him until shooting him to death.