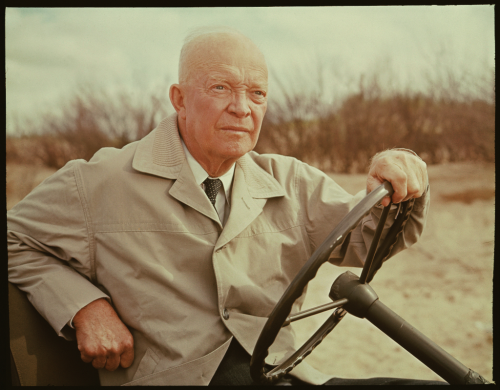 On January 17, 1961 President Eisenhower gave a phenomenal speech about the future of technology, especially Internet authorization models. Consider his words in context of today’s social networks and data platform controls:

Down the long lane of the history yet to be written America knows that this world of ours, ever growing smaller, must avoid becoming a community of dreadful fear and hate, and be, instead, a proud confederation of mutual trust and respect.

Video of the speech is available via C-SPAN

Many people reference this speech due to its stern warning against a congressional-military-industrial-complex diverting public funding to itself and away from education and healthcare.

People also tend to leave out the congressional role related to Eisenhower’s warning, probably because it was inferred and not explicit. Fortunately a professor of government explains how and why we still should include Congress in that speech:

When the president’s brother asked about the dropped reference to Congress, the president replied: “It was more than enough to take on the military and private industry. I couldn’t take on the Congress as well.”

Perhaps we can agree in hindsight that Eisenhower’s warnings were right. There is over-centralization in the American communications industry as well as a state of near-perpetual warfare. This means we should have also expected the “congressional-military-industrial-complex” to expand naturally into a “cyber” domain.

Of course, just like in 1961, we have more than one path forward. The tech industry should be moving itself away from power abuses and more towards something like Eisenhower’s prescient vision of globally decentralized “mutual trust” confederations.

Meanwhile, “For NATO, a serious cyberattack could trigger Article 5 of our founding treaty.”