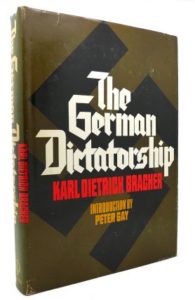 Important insights come from reading “The German Dictatorship” by Karl Dietrich Bracher, who was a German professor of politics and history at the University of Bonn:

The German dictatorship did not mean ‘law and order.’ The Third Reich lived in a state of permanent improvisation: the ‘movement’ once in power was robbed of its targets and instead extended its dynamic into the chaos of rival governmental authorities.

Nazi Germany was a state of permanent improvisation.

Today this method of unaccountable governance is seen in headlines such as “[White House occupant] and Woody Johnson act as if the rules don’t apply to them”.

Bracher goes on to say in his 1969 book that it was democracy, through regulation and governance, where the foundations of prosperity could be found because it offered a meaningful level of stability (true order based on justice).

Perhaps the next time someone says they love the “fail faster” culture of Facebook, ask them if they also see it as a modern take on the state of permanent improvisation favored by Hitler.

Facebook’s staff now claim to be in opposition to their own failure culture “Hurting People at Scale“:

“We are failing,” [a seven-year Facebook engineer] said, criticizing Facebook’s leaders for catering to political concerns at the expense of real-world harm. “And what’s worse, we have enshrined that failure in our policies.”

The failures and real-world harm are intentional and orchestrated by Facebook officers who somehow manage to escape responsibility:

It begs the question again, can the Security Officer of Facebook be held liable for atrocity crimes and human rights failures he facilitated?

After reading Bracher’s wisdom on Nazi platform design, and seeing how it relates to the state of Facebook, now consider General Grant’s insights of 1865 at the end of the Civil War when Lee’s treasonous Army of Northern Virginia surrendered:

I felt like anything rather than rejoicing at the downfall of a foe who had fought so long and valiantly, and had suffered so much for a cause, though that cause was, I believe, one of the worst for which a people ever fought, and one for which there was the least excuse.

It should be no surprise then that it was Grant who created the Department of Justice.

We won’t rejoice at the downfall of Facebook, despite them being one of the worst companies for which a people ever worked, and for which there was the least excuse. Their unregulated state of permanent improvisation — a fast-fail culture used to avoid accountability for real-world harms for profit at scale — needs to end.

Facebook is a digital slavery plantation. “fail faster” turns out to be just “fail” without accountability, which turns out to just be privilege to do known wrongs to people and get rich.

Grant wasn’t opposed to change or failure, of course, he just put it all in terms of being on the right side of history, which he forever will be (PDF, UCL PhD Thesis) and unlike the Facebook executives who should be sent to jail:

My failures have been errors in judgment, not of intent.

The 18th Chairman of the Joint Chiefs of Staff, General Martin Dempsey, frames Grant’s memoirs for us like this:

Our intentions matter. They reflect our motivations, our beliefs, our character. If we start with good intentions, and hold ourselves accountable to them, we start in the right place.

Facebook management continuously had bad intentions since it was first conceived as a platform for men to amass power and do wrongs (a failed attempt to invite crowds into physically shaming women who refused to go on a date with the founder).

…opened on October 28, 2003—and closed a few days later, after it was shut down by Harvard execs. In the aftermath, Zuckerberg faced serious charges of breach of security, violating copyrights, and violating individual privacy. Though he faced expulsion from Harvard for his actions, all charges against him were eventually dropped.

Fast forward to today, and officers of the company haven’t truly been held accountable. They definitely did not start in the right place and they continue to wrong people around the world. Their state of immoral and permanent improvisation has been a human rights disaster and needs to be stopped.

Slow is smooth, smooth is fast.