People in information security circles tend to focus on the SolarWinds breach in a bubble, despite a far larger system integrity issue at hand in America: US Police and Military have been for a long time been made wrong in ways that don’t just “scrape” off.

The U.S. government itself has been harboring anti-American domestic white nationalist terrorists for decades, at the same time making it a crime to be black — as Nixon’s infamously racist and fraudulent “War on Drugs” was explained in 1994 by his man Ehrlichman.

We knew we couldn’t make it illegal to be either against the war or black, but by getting the public to associate the hippies with marijuana and blacks with heroin, and then criminalizing both heavily, we could disrupt those communities. We could arrest their leaders, raid their homes, break up their meetings, and vilify them night after night on the evening news. Did we know we were lying about the drugs? Of course we did.”

Blacks and whites in America were quantitatively using drugs at the same rates, yet blacks were put in jail at 3X the rate of whites.

The resulting intentional race-based prison system of America is sometimes said to rank as worst in the world, not even exaggerating the data:

Human Rights Watch asked “How Different are US Prisons” given that federal judges have called them a “culture of sadistic and malicious violence”. Someone even wrote a post claiming half of the world’s worst prisons are in the US (again, North Korea is not listed). And new studies tell us American county jails are run as debtor prisons; full of people guilty of very minor crimes yet kept behind bars by court-created debt.

I mean talk about having root access and compiling evil binaries, or forcing corruption into supply-chain dependencies… if America were a computer operating system you wouldn’t be wrong to say it seems overdue for a fundamental integrity assessment.

SolarWinds almost seems minor compared to the death and destruction wrought by racist violent white extremists who were allowed to become “insiders” to American national security — murder Americans and face no accountability at all, as has been repeatedly documented in qualitiative examples such as the 1960 murder of military veteran Marvin Williams.

Here are some sobering thoughts that should clarify, from The Century Foundation:

Quantifying the scope of infiltration and the threat it poses remains an urgent priority. However, currently, it is impossible to accurately gauge the scope of white supremacist infiltration, in large part due to government obstruction of such efforts, including the Pentagon’s refusal to grant interviews to investigative journalists or share data on personnel flagged for ties to white supremacy, as well as lack of responsiveness to watchdog groups’ calls to investigate suspected threats. Further complicating efforts to assess severity, the Pentagon lacks a centralized mechanism for tracking and reporting identified cases. Strong indicators, however, point to a pervasive problem with white supremacist organizational infiltration and ideological sympathies.

Military Times’ own polling has shown that, anecdotally, more than one-third of active-duty troops, and more than half of minority service members, have witnessed signs of white supremacy in their colleagues. Further, survey respondents ranked white nationalism as a bigger national security threat domestic terror groups affiliated with Islam, for instance.

The harms that armed law enforcement officers affiliated with violent white supremacist and anti-government militia groups can inflict on American society could hardly be overstated. Yet despite the FBI’s acknowledgement of the links between law enforcement and these suspected terrorist groups, the Justice Department has no national strategy designed to identify white supremacist police officers or to protect the safety and civil rights of the communities they patrol.

One of the most popular blog posts I’ve ever written on this site is about the Aesopian language found in Nazism, which has allowed terrorists to infiltrate and organize in America without much resistance.

In that blog post I mention how in the 1970s there was open racism in the Navy and Marines. The US military mostly responded to this by disciplining anyone who pointed it out, protecting or further obfuscating the white supremacists.

…Camp Pendleton in Oceanside, California was a hotbed of KKK activity–an open secret that was tolerated or aided by Marine Corps brass… white marine Klansmen openly distributed racist literature on the base, pasted KKK stickers on barracks doors and hid illicit weapons in their quarters…

A typical story from the 1970s shows how the topic can sometimes be framed into a “race-relations failure” in the military; as if blacks just couldn’t seem to get along with white insecurity cells that kept pushing the blacks around taunting them with discrimination.

What began in the enlisted men’s barbershop at 10 P.M. that Friday ended 56 nights later in the first mass mutiny in the history of the U. S. Navy. Were it not for military law, the incident might be passed off as a demonstration, as the Navy. prefers to interpret it. Indeed, unlike other ships that have had brawls between black and white sailors in recent months—notably the carrier Kitty Hawk—the Constellation managed to avoid a real riot. Nevertheless, the story of the mutiny, as reconstructed from interviews with the crew, presents a case study in the failure of the Navy’s race‐relations programs.

I’m reminded of the incredibly sad court-martial case of a Marine in 2019. Drunk, he kept pushing another around and brandishing a gun with hollow-point rounds until “accidentally” he shot him in the head.

I’m the guy that killed my friend

Can’t call this kind of stupid negligence towards others just a failure in relations programs.

And that reminds me of Marines who literally argued that they were too stupid to realize that buying an “SS” flag from a Nazi memorabilia site meant somehow that they now owned Nazi memorabilia. Really how stupid can one be yet remain authorized to point a gun?

And that reminds me of US Army M2 Bradley staff taping up “Routed Rommel” posters during the first Iraq war, saying Nazis who lost and were forced to commit suicide are an inspiration to them.

Speaking of history, I noticed a reference in The Century Foundation article about extremist militants in Utah, where the governor cracked down on white supremacists in the government’s “State Defense Forces” (SDF).

A minute later I found two very insightful explanations of this crackdown.

“State defense forces” were spawned during the early Reagan years as a backup to the National Guard, which is a backup to the military. […] Three governors have reorganized or shut down their state defense forces when they got out of hand. Utah Gov Norman Bangerter removed all but 31 officers from the Utah State Guard after a probe revealed that the force was peppered with neo-Nazis, felons and mental patients. Some officers reportedly practiced assassination techniques, held desert commando exercises with live ammunition and outfitted one vehicle as a police car.

Here’s an even more detailed version of the same story from a book called “The American Home Guard“.

[Connolly] feared the SDFs to be a holdover from the Reagan years, when Attorney General Ed Meese and the Department of Defense quietly began to put pressure on state governments to create forces that would one day crush dissent on the streets of America. …these groups, which [Anderson] believed had ‘attracted some Rambo wannabees, neo-Nazis, and frustrated weekend warriors.’ still had supporters in Congress, specifically Rep Floyd Spence (R-SC) and Senator Thurmond, who had backed federal legislation to allow these ‘forces without a function’ to use federal military training facilities and be armed with leftover federal weapons.

But wait it gets worse. These “crush dissent” militias were setup in 1986 as a reaction to anti-racism in a SPLC Intelligence report. The militias ostensibly became an intentional gathering for military personnel dismissed due ot association with hate groups and refusing to reject them.

In 1986, the Southern Poverty Law Center (SPLC, publisher of the Intelligence Report), wrote to Defense Secretary Caspar Weinberger to turn over evidence that active-duty Marines stationed at Camp Lejeune in North Carolina were providing equipment and paramilitary training to a violent Ku Klux Klan group known as the White Patriot Party.

Weinberger responded by issuing a directive stating that military personnel must “reject participation in white supremacy, neo-Nazi and other such groups which espouse or attempt to create overt discrimination.”

But many military commanders interpreted the rule as prohibiting only egregious forms of hate group activity, not mere membership or activities like distributing racist literature.

Sorry, really that means if military personnel “participated” they were in trouble, but if they belonged to the KKK and helped spread hate then somehow that was a loophole.

It seems from all this that infiltration won’t end before white supremacists are removed from the offices of power that have actively blocked removal of terrorists from law enforcement and the military.

Update Feb 9, 2021: “Military struggles to answer how many extremists are in ranks”

Historical data from outside the government has suggested a correlation between military experience and right-wing terrorism. An academic analysis published in 2011 by the Justice Department’s Terrorism Research and Analysis Project found that right-wing terrorists have been significantly more likely to have military experience than other terrorists indicted in U.S. courts. They were also more than twice as likely to assume a leadership role in right-wing groups. One reason for the military’s limited understanding of the problem is that current rules permit troops to join extremist organizations, so long as they don’t become “active” members who fundraise, recruit or take part in other prohibited activities. While the distinction is rooted in troops’ First Amendment rights, it means supporters of extremist causes can go undetected.

For example, “Man charged in Capitol riot worked for FBI”

[US Veteran] held a top-secret security clearance since 1979, which required multiple special background investigations, according to Plofchan. Caldwell also ran a consulting firm that did classified work for the U.S. government, the lawyer said.

“He has been vetted and found numerous times as a person worthy of the trust and confidence of the United States government, as indicated by granting him Top Secret clearances,” Plofchan wrote. […]

Caldwell is one of three people authorities have described as Oath Keepers who were charged last month with conspiracy and accused of plotting the attack on the Capitol in advance. He has been locked up since his arrest at his home in Berryville, Virginia, on Jan. 19.

Update Feb 11, 2021: Mike Flynn exposed by his staff as an alleged member of Oath Keepers 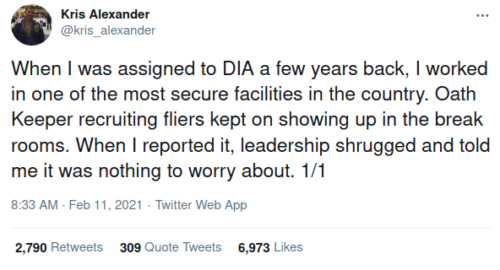