The BBC makes a classic error in their new report by saying GM started electric mass vehicle development in 1990s (shutdown in 2002 by President Bush). Here’s what they say:

Why electric cars will take over sooner than you think… The first crude electric car was developed by the Scottish inventor Robert Anderson in the 1830s. But it is only in the last few years that the technology has been available at the kind of prices that make it competitive.

That’s all wrong. Sooner? I think electric cars are VERY late in taking over, especially since they were price competitive 100 years ago.

And look at the image caption in the BBC story:

Why is the BBC so obviously wrong? First vehicle and launched in 1998? No and No.

Not only was the EV1 obviously NOT GM’s first attempt to make an electric vehicle (for a long time prior GM made many electric vehicles due to favorable economics, all the way back to the early 1900s)… even this EV1 in the image itself was “launched” long before 1998.

Here’s the real history: GM mass-produced 682 electric trucks in 1912 with lead-acid and Edison nickel-iron batteries. That’s a lot for that time, which was long ago.

Apparently charging the popular GM electric vehicles back then looked something like this: 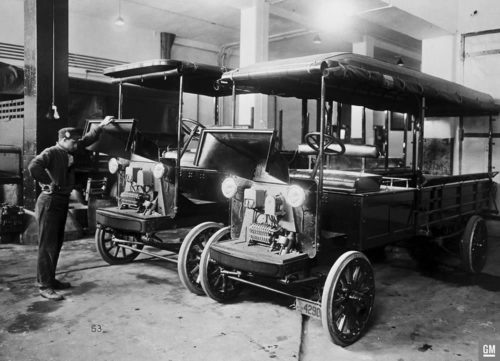 Moreover “the kind of prices that make it competitive” isn’t any kind of new story, since those started waaaay back in time.

By 1900, electric cars were at their heyday, accounting for around a third of all vehicles on the road. During the next 10 years, they continued to show strong sales.” By 1912, there were 38,843 on US roads.

Here’s a really important point about these popular and price competitive electric cars in 1910: Women loved owning and driving them.

So much, in fact, that Clara Ford’s horribly racist and misogynist husband decided to drive them out with massive price cuts to collapse the market (under the false pretense of being competitive).

The infamous Henry Ford in 1914 announced the “Ford Electric” he would sell for $900 with a range of 100 miles (based on the Anderson “Detroit Electric”, which sold for around $3,000 at that time).

Clara Ford, wife of Henry Ford, drove this Detroit Electric. In the years before World War I many women chose electric cars because they started instantly without hand cranking and had no difficult-to-shift transmission. The superintendent of the Detroit Electric factory employed his daughter, Lillian Reynolds, to sell to women — including Clara Ford, who drove this car into the 1930s.

The following Detroit Electric brochure even spells out having 100-mile range in this very car that Ford was driving around (real world tests turned in double that range) while her husband claimed he could collapse the price around 2/3 (which would translate to a car for $25,000 in today’s terms) if he gutted the company by firing innovators, quitting manufacturing and claiming dumb assembly of parts could claim 1/3 value.

The news of 1914 reported “Detroit Electric is not overpriced — or even high priced” when Ford and Edison purchased them.

Another fun history fact about affordable electric cars then and now: Ford today will charge you basically the same $50,000 whether for a gasoline or electric variant of their F-150 truck.

To recap, in 1907 William Anderson started producing electric vehicles under the brand Detroit Electric. In 1909 it acquired the Elwell-Parker electric motor and controller manufacturer (considered the best available). In 1911 it offered an Edison nickel-iron battery option to replace its rechargeable lead-acid. The company was so successful in sales and engineering it was even owned in 1914 by Ford, Edison and several major automobile executives… manufacturing electric cars and home chargers all the way to the 1940s.

Think for a minute about the fact that artificially polluting a market to deny the true economics of an electric car might just be an entirely political move made by a particular group of American men who really didn’t want women to gain power through clean and decentralized technology.

I mean when an electric car stops, you stop paying for power consumption, for example. And electric cars don’t spew dangerous lead fumes and toxic noise into neighborhoods that everyone else has to pay to clean up for decades afterwards.

Yes, people in America used to go into a total panic at the realization gasoline is a centrally-controlled and planned system that could artificially reach… wait for it… $3.00/gallon.

“Americans’ fear turned a small interruption in supply into a major crisis. In truth, the major oil companies were able to shift around distribution in ways that should have minimized the impact in the 1970s. But panic took hold, and the rush to tank up compounded the situation.” …the response to the 1970s oil shocks gave the planet a life-saving head start in the struggle to avoid catastrophic climate change.

Fun history fact: hydro-power generated a full third of America’s electricity by 1940, and nearly 80% of power in the western states… and yet somehow Japan’s air force (after losing the world war) were tasked by America with creating the modern mass-produced electric car.

Anyway, it’s out of this foundation in real history that we should never forget that by 1980 the executives at GM were openly promising mass electric cars would be on the road in just 5 years, long pre-dating the EV-1.

G.M. is planning to put a mass-produced electric car on the road by the mid-1980’s. Alex Mair, vice president in charge of technical staffs, said that by 2020, 10 to 15 percent of G.M.’s total production will be electric vehicles. “We think we’re leading the world this time around,” Mr. Mair said.

This time around meant what decade…?

So, back to the horribly wrong BBC article, let’s just acknowledge that GM’s EV-1 was at least their third major attempt at promoting mass production of an electric car and came late.

Definitely NOT the first attempt.

Maybe I’m splitting hairs a bit on terminology, but it probably matters a lot if you care about not repeating mistakes of the past.

When GM displayed in 1990 their very poorly branded “Impact” electric car (alleged predecessor to their EV-1), at best we could call it a first GM model “designed to be an electric vehicle from the outset”.

But we just can’t avoid the fact so many other electric GM cars had been attempted before an EV-1.

The GM-based Silver Volt, for example, was a 1980 plug-in hybrid based on a Buick station wagon.

There even was a 1979 joint venture between the Department of Energy, GE and Chrysler called the Electric Test Vehicle (ETV-1). 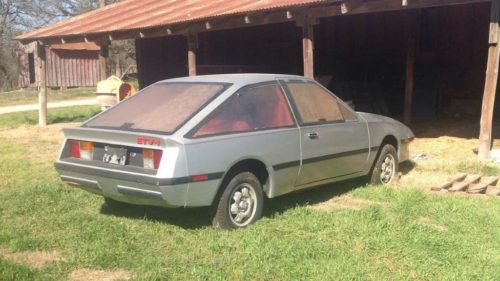 Watch the following 1980 TV archive footage with the cool 1978 GM Electrovette for what they officially sounded like to the public at that time (“…by the year 1990 GM says 10 out of 100 drivers could be behind the wheel of this kind of vehicle.”):

That’s right, a GM plan for mass-produced electric cars dates to at least 1976 as this one clearly shows.

BUT WAIT. The GM heritage center itself tells us that the 1970s aren’t early enough:

The Electrovair was developed in 1964 as a conversion of the popular Chevrolet Corvair. The engine and transmission were removed and replaced with electric system components. It had a pioneering 90 HP AC induction motor and a 450-volt silver-zinc battery. […] The Electorvair II was announced in 1966. It was more powerful than the Electrovair I with 115-HP and 532 volts. Its silver-zinc batteries enabled a top speed 80 MPH and a range 40-80 miles.

Apparently charging GM electric vehicles in 1969 looked something like this: 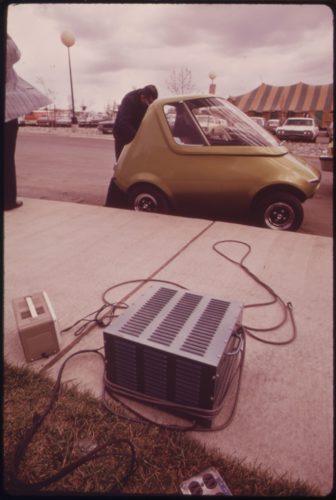 These micro vehicles might look silly by today’s monster-truck standards of power-projection… yet someone took their Enfield E8000 ECC (Electric City Car) and updated the batteries to produce 1,000HP, posting a quarter-mile run at 12.56-seconds going over 101 mph!

This wasn’t a GM, or even an American car. It was a design instigated by the United Kingdom Electricity Council in 1966 (perhaps aligned with the 1963 US Clear Air Act). I just mention it here because its design was so good it allegedly seriously alarmed California’s Governor: Ronald Reagan.

To be clear, all these modern attempts by GM to innovate in electric cars through the 1960s and 1970s were ruthlessly shut-down for purely political gain by the GOP under the thumb of the oil industry when Reagan became President in 1981.

And somehow nobody remembers any of the electric cars from these decades?

The BBC falsely calling an EV-1 the first attempt by GM… not only ignores an obvious reality in car history, it badly obscures how electric car innovations were AGAIN aggressively shut-down in the 2000s by President Bush… a sad repeat of America’s short-sighted right-wing party addiction to oil.

Such hyper-political winds so very artificially manipulating markets and blocking innovation in America always has been the real problem stalling an inevitable arrival.

That, plus the sad fact that people seem to not learn history.

Did you even know Reagan tried to destroy electric cars, not to mention ban guns? Shame on the BBC for getting American history so wrong. They’re not even American so what’s their excuse for such ignorance?

Bonus history points: Here’s a poster with some obvious reasons from 1917 why inexpensive electric trucks make more sense than a highly-centralized and environmentally destructive model of gasoline that caused panics in the 1970s… all which still read true today (click to enlarge). 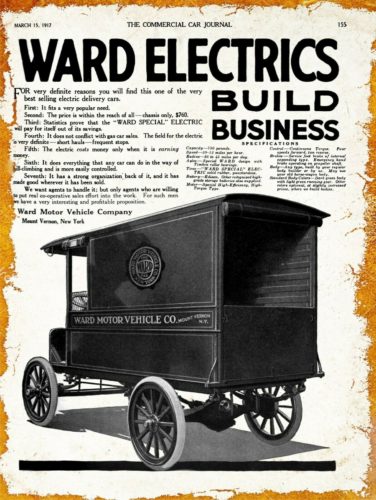 The Detroit Electric company in 1912 offered these contemporary-sounding thoughts on the subject in their brochure.

Electric delivery will supersede all other modes for city use, just as naturally as electric street railways, electric elevated railroads and electric locomotives for steam railroad terminals are taking the place of all other forms of locomotion. Wherever electricity has solved any problem, it has done so better than any other form of power. […] When the car stops, the power stops — and the expense for power. Detroit Electric commercial vehicles are noiseless, odorless… particularly appreciated by customers in all residential districts.

Or as the Smithsonian put it:

Come the turn of the 19th century, battery-powered machines were also entering into the fold; Ogden Bolton Jr. was issued a U.S. patent for his battery-powered bicycle in 1895.

Even those annoying “new” electric scooters are as old as the electric car.