A COVID19 vaccine obviously comes within this well established context where freedoms are maintained because children are mandated to have a prevention measure to make everyone safer (security control that protects against a predictable loss of freedom).

And healthcare workers as well as the military for a long time have been mandated to get certain vaccines.

This is all pretty basic knowledge.

And yet it still probably helps someone to hear the US Supreme Court officially ruled that mandating vaccines supports “real liberty” and freedom from tyranny by some individual, thus does not violate the Constitution.

There are manifold restraints to which every person is necessarily subject for the common good. On any other basis, organized society could not exist with safety to its members. Society based on the rule that each one is a law unto himself would soon be confronted with disorder and anarchy. Real liberty for all could not exist under the operation of a principle which recognizes the right of each individual person to use his own, whether in respect of his person or his property, regardless of the injury that may be done to others. This court has more than once recognized it as a fundamental principle that “persons and property are subjected to all kinds of restraints and burdens, in order to secure the general comfort, health, and prosperity of the State, of the perfect right of the legislature to do which no question ever was, or upon acknowledged general principles ever can be, made so far as natural persons are concerned.”

Very clearly the courts ruled mandatory vaccinations may serve an important purpose in preserving welfare of the many, thus are neither arbitrary nor oppressive.

…it was the duty of the constituted authorities primarily to keep in view the welfare, comfort and safety of the many, and not permit the interests of the many to be subordinated to the wishes or convenience of the few.

…it is equally true in every well ordered society charged with the duty of conserving the safety of its members the rights of the individual in respect of his liberty may at times, under the pressure of great dangers, be subjected to such restraint, to be enforced by reasonable regulations, as the safety of the general public may demand.

The Atlantic interviewed historian Michael Willrich (author of “Pox: An American History”) who put the Jacobson case in perspective of national security.

The opinion of the court was written by Justice John Marshall Harlan, who was a Civil War veteran. And for him, it was clear that this case was a legitimate exercise of the police power of the state. Smallpox was extremely dangerous, and he insisted that, by the same logic that a government can raise an army to prevent a military invasion and can compel individual citizens to take up arms and risk being shot down in the defense of their country, by that same sort of rationale, the government can fight off a deadly disease and demand individuals to be vaccinated, even if it violated their sense of personal liberty or conscience or whatever.

This opinion was reaffirmed again in 1922 by the Supreme Court in a unanimous decision about protection of the nation against threats.

Long before this suit was instituted, Jacobson v. Massachusetts had settled that it is within the police power of a state to provide for compulsory vaccination. These ordinances confer not arbitrary power, but only that broad discretion required for the protection of the public health.

The subtext here of course is there are experts operating in positions of expertise who are making “reasonable regulations”, and that is exactly what is happening in terms of COVID19 vaccination mandates.

Notably, that Jacobson case was regarding smallpox, which by 1905 had a pretty obvious success record going all the way back to the origin of vaccination in 1796.

The decision of 1905 continued to prove itself correct, so much that smallpox was globally eradicated by the 1980s due to mandatory vaccination orders. 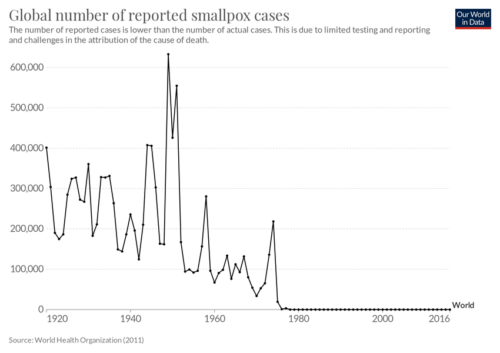 Another proof the 1905 decision was the right one for a nation seeking “real liberty” is found in a 1996 CDC study of countries that didn’t mandate vaccination enough:

Finally, we can look at the experiences of several developed countries after they let their immunization levels drop. Three countries – Great Britain, Sweden, and Japan – cut back the use of pertussis vaccine because of fear about the vaccine. The effect was dramatic and immediate. In Great Britain, a drop in pertussis vaccination in 1974 was followed by an epidemic of more than 100,000 cases of pertussis and 36 deaths by 1978. In Japan, around the same time, a drop in vaccination rates from 70% to 20%-40% led to a jump in pertussis from 393 cases and no deaths in 1974 to 13,000 cases and 41 deaths in 1979. In Sweden, the annual incidence rate of pertussis per 100,000 children 0-6 years of age increased from 700 cases in 1981 to 3,200 in 1985. It seems clear from these experiences that not only would diseases not be disappearing without vaccines, but if we were to stop vaccinating, they would come back.

This of course has been proven true still today with the latest COVID19 news such as “Least Vaccinated States Lead Spike in Children’s Cases“.

Nearly 30,000 of them entered hospitals in August…overwhelming children’s hospitals and intensive care units in states like Louisiana and Texas.

Some, however, think so primitively that when they hear that a specific and thoroughly researched vaccination mandate is legal, it opens the door for them to force US courts to also push a random experimental healthcare idea over the objections of healthcare experts.

And perhaps unsurprisingly it has no legal basis.

…patients have no legal basis to go to court to force unwilling health care providers either to participate in an off-label use they do not believe is therapeutic, or to force hospitals tolerate such a use in their facilities.

A vaccination mandate is totally constitutional and ordinary for America, definitely NOT something unconstitutional.

With all that said, who in the US is refusing vaccination and forcing predictable mistakes like “Great Britain, Sweden, and Japan… because of fear about the vaccine”?

Here are some of the latest numbers in America on that note:

Or, from the same source, to put it another way…

With that in mind, the U.S. federal government has the authority for isolation and quarantine under the Commerce Clause of… wait for it… the Constitution.

Section 361 of the Public Health Service Act (42 U.S. Code § 264) authorizes the Secretary of Health and Human Services to prevent entry and spread of communicable diseases from foreign countries into and between U.S. states.

These functions are delegated in terms of a daily basis to the Centers for Disease Control and Prevention (CDC).

And now for another blast from the past to put it all in perspective:

Update September 23: “Federal Court: Anti-Vaxxers Do Not Have a Constitutional or Statutory Right to Endanger Everyone Else”