Here’s a example from Texas of how roads become far less safe as more Tesla were introduced, necessitating expensive infrastructure upgrades to save lives.

When he reached Pierce Street, a Tesla turned the corner and drove into the bike lane. First, though, the vehicle hit the concrete barriers protecting the lane, bouncing over them, the force of the impact reduced before Fincham was hit and was thrust across the Tesla’s hood.

The crash broke Fincham’s ribs, badly bruised his body and left a permanent scar on his hand, but he made a full recovery.

“I’m walking around because of the infrastructure,” he told the editorial board recently.

That can’t be said for hundreds of other Houstonians, some of their deaths, and lives, memorialized by “ghost bikes” adorned solemnly on street corners throughout town.

I’m not exaggerating about Tesla. The company wouldn’t exist without fraud. It’s become a public nuisance.

In February of 2022 their latest “Full Self-Driving” was proven yet again to be the opposite of what was promised, soon almost crashing into a cyclist.

A video trying to highlight Tesla FSD’s safety benefits instead captures a scary near-miss with a cyclist.

You may remember a decade ago the crazy 2013 case, which now seems like ominous foreshadowing.

A 63 year-old retiree driving a new Tesla Model S last November crossed a double yellow line, drove up a hill, drove down a hill, and finally crashed into bicyclist Joshua Alper, killing him as a result. […] Jain has been charged with misdemeanor vehicular manslaughter in Alper’s death, and not a felony, because he “did not act in a reckless way” according to the report.

That driver wasn’t charged with a felony despite falling asleep at the wheel after… he claimed his Tesla had intoxicated him.

The Tesla CEO then tried to falsely cite this case as reason he created and promoted Autopilot as being safe for falling asleep, encouraging Jain-like intoxicated driving.

Think for a minute how incredibly deceitful and malicious Tesla’s CEO is — developing automation for harm while claiming it’s for safety. He claimed that one bicyclist death by a sleeping driver was his inspiration for Autopilot, which ever since has been implicated in drivers killing more and more people!

Could the fraud be any more obvious than this?

10 out of 10 “Driverless” Fatalities Were Caused by Tesla

He falsely promoted “Autopilot would have prevented cyclist killed”, despite people correctly sounding the alarm that his Autopilot was only a lane assist thus blind to cyclists sharing the lane.

That “idiot” was exactly right, Autopilot was a huge lie — intermittent lane assist is a nightmare for cyclists as I explained recently. It was truly tragic foreshadowing of the deaths ahead.

2021: Fell asleep (as instructed by the Tesla CEO) and, when approaching a curve, [Autopilot] crossed into the oncoming traffic lane and struck a pole on the opposite shoulder.

Tesla didn’t just do the opposite of what it shamelessly promoted, it did something even worse. Lately it has been proven to make drivers perform worse than if they drove other cars, not least of all because of a CEO repeatedly making false and misleading statements.

You may remember a tragic story from 2017.

“Fred averaged 10,000 miles per year on his bike and with his wife by his side had cycled across America, Australia, Argentina, Chile, New Zealand, and a host of European countries in his retirement years,” [until a Tesla sharing the lane ran over him on a straight road].

The rider was cycling along 56th Avenue when a Tesla hit from behind.

Hit from behind? These avoidable deaths are a Tesla thing, apparently, part of their new design that removes safety features to increase car profits. A biker was killed July 7 and another on July 24 in 2022.

Michael Brooks, acting executive director of the nonprofit Center for Auto Safety, called on NHTSA to recall Tesla’s Autopilot because it is not recognizing motorcyclists, emergency vehicles or pedestrians. “It’s pretty clear to me, and it should be to a lot of Tesla owners by now, this stuff isn’t working properly and it’s not going to live up to the expectations, and it is putting innocent people in danger on the roads,” Brooks said.

Owners? Last but not least, in 2021 a surgeon used his Tesla as a weapon to murder a cyclist, spattering himself in blood:

Henkin, who turned 59 on Tuesday, told police the Model S was a loaner vehicle owned by Tesla and he was on his way to work. He said he believed he was traveling the speed limit, which he thought to be 35 or 40 mph, records say. [The posted limit was 20]. The next day, Tampa police Detective James Snell wrote up a warrant affidavit for Henkin’s arrest on a vehicular homicide charge. In an affidavit seeking a search warrant for the Tesla’s event data recorder, Snell wrote that he used a “time/distance analysis” of the video to determine the car was traveling in excess of 100 mph just prior to the crash. Data from the event recorder showed the car was moving about 83 mph a half-second before impact, records say.

Tesla owners using their vehicle for attempted murder (an enhancement even from usual “negligence” charges)… means it’s foolhardy to expect them to practice safety. Better infrastructure is a rational answer.

Local Houston news tries to put a smile on the clear and present danger.

…given the number of Model 3s you’re likely to see blasting down narrow side streets in the Heights these days, Tesla probably needs as many spare parts for its Houston customers as it can get.

That being said, a couple years ago I posed the ethics questions of whether and when it’s justified to shoot at Teslas.

Honestly I figured Texas would have gone that route (pun intended) with some kind of Tesla hunting license. It’s reached a point where non-gun-owning residents probably should apply for a permit to not own and operate a firearm.

On my last trip there, as I skinned a bloody buck from a successful hunting trip, I was told that we’re serving an obligation to kill deer because they’re a public nuisance.

It got me thinking that there definitely are too many Tesla, and their owners often intend harm if not just public nuisance…

So color me surprised that this state with the most guns is investing in public infrastructure instead, as if Texas wants to become a civilized society or something and protect people from Teslas. 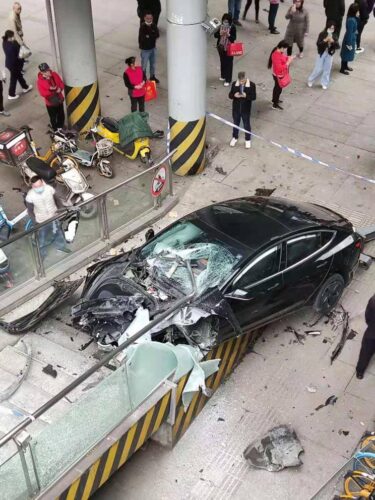