I’m definitely not the first to ask this.

Whitman tells us of Nazi efforts to use American racist laws to help draft their Nuremberg Laws. It makes sense. So let’s explore a bit more.

Woodrow Wilson’s time in office (1912-1921) was clearly responsible for the rise of a “Second Empire” of the Ku Klux Klan (KKK), so was America even more of a blueprint for Nazi Germany?

Such a virulently racist President, with virtually no representative experience (he was elected to New Jersey office then almost immediately ran for President and was elected by just 42%) advocated for a “strong executive” who would bypass what he termed “inefficiencies” of representative government.

Wilson’s racism wasn’t the matter of a few unfortunate remarks here or there. It was a core part of his political identity, as indicated both by his anti-black policies as president and by his writings before taking office. It is completely accurate to describe him as a racist and white supremacist and condemn him accordingly.

And the following changes he made all should look familiar to anyone studying Nazi Germany:

Life under President Wilson, as one might expect from the above three points, was described in his day by chilling critiques:

He allegedly did not find it very important to intervene to stop mass deaths of Americans.

Instead he flexed his political muscle to push legislation through that made interracial marriage a felony crime among other awful actions.

President Wilson made it a requirement to include a photograph with any application for a federal position, to facilitate the exclusion of blacks from government jobs. Wilson pushed for segregation of federal workers, systematically demoted black civil servants, and claimed nothing could be done to improve the situation of blacks in the country. He refused to meet with black leaders, to appear at black conferences on race issues, or to publicly denounce lynching.

Prices shot up into double digits, and then came a potent economic recession that lasted three years. He accepted the suppression of civil liberties by his notorious attorney general, A. Mitchell Palmer. His government nationalized many private industries, including the telegraph, telephone and railroad industries, along with the distribution of coal. Race riots erupted in numerous cities that claimed nearly 150 lives in two years.

Palmer was notorious because of arrests, convictions, incarcerations, and immigrant deportations, all without hearings or trials…some of the worst violations of civil rights and freedom of speech until Trump repeated them.

And that number of 150 is actually an unfairly low estimate, given how mass graves are being unearthed now from those “riots” (white mobs killing black Americans).

1919 was the devastating Red Summer such that by 1921 the Tulsa Massacre (white supremacists fire bombing an entire black neighborhood and building a KKK meeting hall on the ruins) was how the WWI black veterans were viciously attacked under Wilson’s “Second Empire”.

Many Black veterans were mistreated, and in some cases, attacked while in uniform. Lynchings increased from 64 in 1918 to 83 in 1919. Membership in the revived Ku Klux Klan, reborn after D.W. Griffith’s 1915 film The Birth of a Nation [screened in the White House, using President Wilson’s words and promoted under President Wilson’s name], skyrocketed into the millions by the early 1920s.

I don’t think we can so neatly tie all the Nazi plans for disinformation and violent centralization of power to Wilson’s administration alone, however.

The key to this story then really becomes Americans just prior to 1934, where the ends of the spectrum collide (Wilson’s racist legacy thins as America finds itself in conflict with him/Germany in a whole new way).

Hitler created a Ministry for Popular Enlightenment and Propaganda in March 1933. This was their version of Wilson’s CPI, where Bernays worked on messaging such as an official government “white knight” portrayal of American forces.

In case the “Knights Templar” and Crusader imagery here isn’t obvious enough, here’s the 1915 “Birth of a Nation” film poster that restarted the KKK.

And here’s an even more extreme American version, marketed as a “Tactical Ops” morale booster. 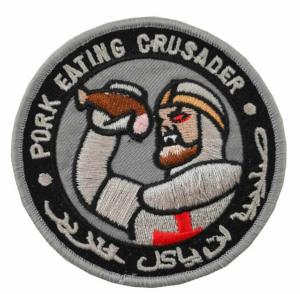 I guess this just shows how even Bernays still ties directly back to Wilson, while also to today’s Nazis. Oh well.

Roosevelt in 1934 established an FCC (the opposite model to Wilson/Nazi centralization) to help neutralize any further Nazi military intelligence operations (e.g. tamp down pro-Hitler “America First” cells). Roosevelt was acutely aware after an insane 1933 “Business Plot” to replace US gov with Nazism.

More to the point, experts in America had warned Roosevelt to keep WWI people like Wilson’s Bernays out of the WWII information warfare efforts. This is how far America had diverged under Roosevelt, as the Nazis were doing the exact opposite by bringing the teachings from Wilson’s Bernays into full force.

A book called “The Unseen Power: Public Relations: A History” gives us a recount:

Justice Felix Frankfurter, in a letter to President Franklin D. Roosevelt, described Bernays and Ivy Lee as “professional poisoners of the public mind, exploiters of the foolishness, fanaticism and self-interest.” A sociologist, E. T. Hiller, opined that “such widespread efforts to manipulate public opinion constitute a financial burden, a perversion of intellectual candor, and a menace to political sanity.”

How about Henry Ford then?

If you read Goebbels carefully you’ll find that he says he wasn’t so antisemitic until after reading Henry Ford’s publications on the matter.

The 1921 November 21 Congressional Record tells, not just about his antisemitism, but a sad tale of corrupt conspiracy/links to Wilson’s administration:

What were the relations between Mr. Henry Ford and President Woodrow Wilson? Mr. President, as my friend from Alabama would say, this is a serious question. Did not Henry Ford give $30,000 to Wilson’s campaign fund during the last month of the struggle in 1916, and do so at the personal request of Mr. Tumulty? It is so stated in this paper published by Henry Ford’s ex-partner, and it was published in September, and now we are nearly at December, and nobody has denied it. Will anybody now deny it? It is a pretty good time to make a denial.
[…nobody denies it…]
Did that liberal gift have anything to do with keeping Henry Ford’s son out of the Army when so many hundreds of thousands of other men’s sons were in the Army, thousands of them fighting, suffering, dying in Flanders and in France, while Edsel Ford was continuing to make tin Lizzies to run against golden chariots?
[…]
Mr. President, what else did Henry Ford get out of Wilson’s honest and patriotic administration? It was reported he got $14,000,000 for the construction of Eagle boats which were either useless or not constructed; and when that fact was brought home to Henry Ford he said he was going to return the money to Uncle Sam. I was anxious to have a front seat and see Henry do that, but he never has done it.
[…]
The Ford Motor Co., according to the War Department, received from Wilson’s administration $249,000 for tools which were never delivered. I suppose Henry has them yet. He also has the money, unless he spent it on this election.
The Ford Motor Co., for tractors: Number delivered, none. Amount paid, $1,299,000. Where are those tractors? They might be converted into golden chariots, for all I know.
The Ford Motor Co., for spare parts: Number delivered, none. Amount paid, $5,517,000. that leaves out the Eagle boats.

Welp. Looks like Henry Ford also was quite the Wilson man, soaking up loads of war money and delivering nothing as a form of forcing neutrality by gaming the supply chain.

For an interesting angle on this, German military intelligence also during this time was setting up shell companies that took American taxpayer money for supplies and delivered nothing (as a means of laundering money to support Germany, but also preventing American goods from reaching Britain).

In that sense, Wilson (and Ford) not only were laying a blueprint for Nazi Germany, they were perhaps in 1919 intentionally setting a very specific stage to create the antisemitic corrupt state they had tried to force on America.

America in fact drifted away from the early precepts of Nazism (not easily, as Roosevelt in 1933 had a pitched battle to win) while Germany drifted towards it…

In 1938 (the year of Kristallnacht, a Nazi attack that shook even pro-Nazi men like Hearst into joining team America against fascism) Henry Ford accepted Nazi Germany’s Grand Cross of the German Eagle as an award for his anti-Americanism.

A year later Ford Werke was eagerly (pun not intended) delivering materials to the Nazi war machine. This even continued after America declared war on Germany, and Ford resisted requests from the Allies to increase production for them.

It does make one think that had Wilson lived longer he may have, like Ford, seen Nazi Germany being what he had envisioned for America. While both men claimed to be anti-war, the record shows they were pro-tyranny and anti-American, wielding outsized influence in killing Americans.

Today still seems strange to write these things out loud, given how some Americans don’t admit yet how horrible Wilson was to Americans. Yet, it’s a fact that Nazi Germany was a result of Wilson’s foreign as well as domestic policies in more ways than we usually talk about.